Dr. Oleg Antonov is a visiting researcher at the Department of Global Political Studies (GPS) and at the research platform Russia and the Caucasus Regional Research (RUCARR), Malmö University. He joined the GPS in September.

His research interests include the Soviet history of Tajikistan, educational reform, minority groups (minority rights, language, education and culture), international relations (soft power diplomacy of Russia and China), political participation and mobilization, civil and political rights, the transnational sources of authoritarian durability, youth policy and youth movements. His research on authoritarian legal harmonization and diffusion of norms has been published in Democratization, Baltic Worlds and by the Central Asia Program at The George Washington University in Washington DC. He was previously a visiting fellow at the Centre for Baltics and East European Studies (CBEES), Södertörn University. His views have featured in The Diplomat and Radio Free Europe. We are happy to welcome our new intern, MA Laura Pennisi, who is joining RUCARR and the Department of Global Political Studies during the period September to the beginning of November 2020. She is currently studying a master program in Russian and Eurasian Studies at Uppsala University.

Laura Pennisi holds a Bachelor in Communication Studies (Catania University) and a Master in translation studies (Sapienza University of Rome), both with a major in Modern Greek language, literature and history. After living several years in Greece, she developed a keen interest in the Greek communities of the post-Soviet space with a particular focus on the Caucasus. As an intern at RUCARR, she seeks to deepen her theoretical knowledge and get the necessary skills for her future research activities. She is also completing a master program in International Relations at Staffordshire University.

Abstract
This article (in collaboration with Suzanne Harris-Brandts, Department of Urban Studies + Planning, MIT) examines the ten-line cable car network of Tbilisi, Georgia,constructed between 1953 and 1988, then decommissioned in the 1990s and partially reactivated since 2012. During the Soviet era, Tbilisi’s cable cars played an important role in the city’s mass mobility, particularly in areas of steep geography. They also functioned ideologically, supporting Soviet ambitions toward the collective provision of public transportation and accessto recreational spacefor the working proletariat. This article unpacks such ideology, chartingits evolution over the network’s sixty-year timeline. It describes the ideological shifts that took place following the collapse of the Soviet Union and Georgia’s transition to a capitalist economy. Specifically, it explores how Tbilisi’s cable car network is linked to changes in government urban development priorities and desires to create tourism attractions, while also reinforcing select framings of the surrounding landscape. The newly introduced cable car lines of the 21st centurynow reflect contemporary ideological goals that see cable cars as assets for luring global capital and facilitating the commodification of Tbilisi’s historic cityscape. The article thus argues that the city’s cable car network can be understood as embodying changes in government stances toward labor, leisure, and the direction of future development, while further reflecting the mobility politics of the city. The findings are based on personal interviews and historic document analysis, as well as transit ridership and City Hall data that collectively provide an evaluation of Tbilisi’s cable car network as it has transformed since the 1950s.

BIO
David received his doctoral degree in Urban Studies and Regional Science at Gran Sasso Science Institute in 2017 where he studied the state use of mega-events as a tool for urban development and the imposition of legal exceptions onto host cities. Subsequently, he joined the University of Lausanne as a postdoctoral researcher where he studied the impact of megaprojects in the urban development of Kazakhstan. Currently, he is a postdoc at the Department of Urban Studies at Malmö University where he is carrying out a research project scrutinizing the role of legal exceptions in urban planning for the realization of the real estate megaprojects in Georgia and its surrounding governmental discourses. David’s research interests include interrelation of mega-events and legal exceptions, mega-events and urban image construction, mega-event related urban policy mobilities and the use of mega-events as a tool of urban development in Central Asia and the South Caucasus. David is also a principal researcher in the Shota Rustaveli Georgian National Science Foundation-funded project “Examining the Social Impacts of Large, Private Sector Urban Development in Batumi and Tbilisi”.

Guranda Bursulaia, PhD Candidate at Free University in Tbilisi (Georgia) and Swedish Institute visiting researcher 2019 at Caucasus Studies, Malmö University, has a new publication: “The voices of silence: The case of Georgian history textbooks”. The article appeared in the journal Caucasus Survey and was largely written during the research visit to our department.

On January 28, Dr. Stepan Grigoryan – Chairman of the Board of the Yerevan-based Analytical Centre on Globalization and Regional Cooperation (ACGRC) NGO – gave the seminar entitled Velvet Revolution and Political Developments in Armenia.

Dr. Grigoryan holds diplomatic rank of Envoy Extraordinary and Minister Plenipotentiary of the Republic of Armenia. In the years 1998-2000, he was Advisor to the Minister of Foreign Affairs of the Republic of Armenia, and in 1995-1998 as a diplomat, he held different positions at the Armenian Ministry of Foreign Affairs. In 1990-1995 Stepan Grigoryan was a member of the Armenian Parliament.

Prof. Oliver Reisner, Ilia State University, Tbilisi, gave a seminar to staff and students during his visit to RUCARR, Malmö University on October 9-10. The topic of his presentation was Social Cohesion and Political Developments in Contemporary Georgia, which was followed by a lively discussion. Thank you so much for sharing your ideas and research on this timely topic!

Silence as a Narrator: The Case of the Georgian History Textbooks

Guranda Bursulaia, PhD Candidate at Free University in Tbilisi (Georgia) and Swedish Institute visiting researcher at Caucasus Studies, Malmö University, will give the presentation: “Silence as a Narrator: The Case of the Georgian History Textbooks” at the Caucasus Studies web & campus seminar on May 7.

The seminar is about the construction of collective memory about the 1992-1993 war in Abkhazia in the Georgian school history textbooks. Guranda will discuss the transformation of the textbooks throughout the last 25 years marked with major political and social changes in the country. Besides, silencing, as an instrument of major narrative formation, and masterminds behind it will be analyzed using the example of the Georgian textbooks.

Dr. Aram Terzyan, guest researcher at the Department of Global Political Studies (GPS), Malmö University, and Assistant Professor at Yerevan State University will give a lecture for staff and students on February 27. The title is: Explaining the evolution of Armenia’s foreign policy.

Welcome to attend on campus or online! 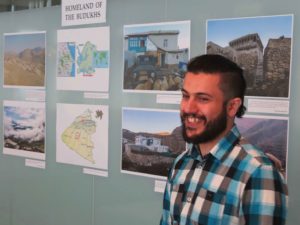 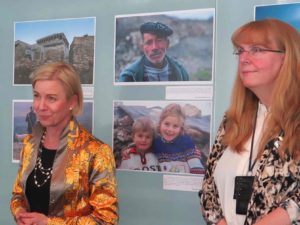 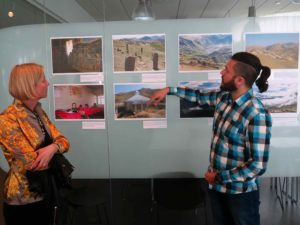 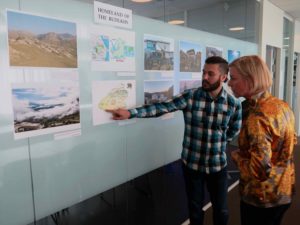 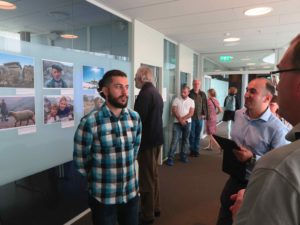 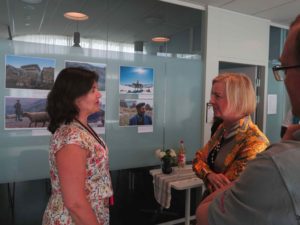 On May 23 a photo exhibition about the North Caucasian minority the Budukhs opened at Caucasus Studies & RUCARR, Malmö University. The exhibition includes photos by three photographers: Zaur Mirzayev, Taleh Valehov, Elnur Aliyev. It was opened by Ingrid Tersman, Sweden’s Ambassador to Azerbaijan and also chairmaan of the Advisory board of the research platform “Russia and the Caucasus regional research (RUCARR).

In connection with the photo exhibition the film project “Homeland” about the Budukhs was shown, created by Orkhan Hajiyev.

The afternoon will start with the opening of a photo exhibition and short documentary film about the Budukhs, a Dagestani minority group in northern Azerbaijan. Organiser: Elnur Aliyev.

14.15 – Mahama Tawat: “What’s new in the Russian academic landscape? Insights from Higher School of Economics (HSE), Moscow”
Mahama Tawat is an Assistant Professor of Public Policy and Administration at the Higher School of Economics, Moscow. He is also a research associate at the Malmö Institute for the Study of Migration, Diversity and Welfare, Malmö University, Sweden